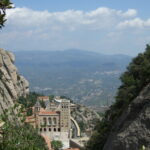 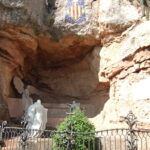 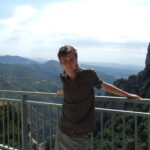 Grail Journey A Pilgrimage to Montserrat

Since I went here with my two youngest kids in 2008, I have wanted to bring pilgrims to this place. Over the years, while bringing lots of pilgrims to Glastonbury, I told them about Montserrat, and at some point, in magical Glastonbury, I met a group from Spain who further encouraged me to follow my vision. And then, in spring 2018, a group of pilgrims, who were with me on my trip to Glastonbury, INSISTED that I take them. So, this trip has been a long time in the making, so much the more powerful…

We will stay in Cel-les Abat Marcet  LINK in the Montserrat mountain itself. Read here: Montserrat, and here: History, close to the Benedictine monastery spending the time in prayer, walking meditation, breathtaking scenes of the landscape, and work as Lightworkers delving into the mysteries of the two aspects of the feminine energy, and the two aspects of the masculine energy, through a very intensive and life-changing course. Everything, of course, conducted in the spirit of The Christ and The Holy Grail. Montserrat has a fantastic basilica, in the basilica there are the most beautiful artworks (actually many art students from all over the world go to this church in connection with their studies), a very powerful Black Madonna, which will be one of the central entities in our work, and behind her a very special meditation room with a very high energy, soaring high in the sky and all the way down to the center of the earth, and, in the middle of the church: The planetary heart chakra. The entire place is dedicated to The Virgin Mary and the Archangel of Michael. These powerful masters always work side by side, as is the case in England with the two leylines, the Mary’s Line and the St. Michael’s line, as is the case in numerous churches and holy places all over Europe. The basilica also has its own fantastic choir: Escolania Montserrat, see LINK In this link they sing the national hymn of Montserrat, called Virolai, which is so strongly connected with the freedom fighters of Catalunya during Franco’s regime, and this choir also sing the most beautiful classical music, some of which was actually composed by one of the monks who lived here in the past, Narcis Casanovas. Moreover, Montserrat is the place, where Sir Percival found The Holy Grail in the grail castle long gone, and still today, the energy lingers. Consequently, we will also delve into the ancient mysteries of the Druids and the Knights Templars, who used to live in this castle, along with the ancient mysteries of Isis and Venus. For in AD 197 the Romans founded here a temple for Venus. Indeed, the eternal feminine is linked to Montserrat, and we know, that a curious religious order of women remained here until 976 when Count Borrell of Barcelona replaced them with twelve Benedictine monks from Ripoll.

Our days will approximately be as follows:
Laudes in the basilika
We greet The Black Madonna
We meditate behind the Black Madonna, where the energy is very high.
Breakfast
We enter the Mary Magdalene light exercise and do the channeled meditation of the day.
Afterwards it will be possible to ask questions, also about more personal aspects of the meditation.
Lunch
The pilgrimage of the day
Vesper in the basilika
Dinner

At some point we might want to spend a day in Barcelona. The famous artist, Gaudi was inspired from the rugged peaks of Montserrat, and trees upside down, to create the fantastic and outstanding church La Sagrada Familia (The Holy Family), which is still under construction – according to the directions of Gaudi, who is no longer among the livings. We will also see the Gaudi village and enjoy Barcelona, the wonderful cafes and restaurants. I know a very nice square.

I will bring my travel harp, Bletadith, called after one of the mountains surrounding The Ring of Brodgar, an ancient stone circle on the Orkney Islands. As for me, I grew up a Catholic, and sing in the “Catholic Our Lady’s Cantory” in Aarhus, however I do not consider myself as belonging to a certain church, since, to me, the spiritual world is universal, but to sing in honor of God is what I do, both in words, on my harp, and in the church, and Montserrat certainly inspires to sing and play directly inspired music, being the planetary heart chakra and all.

The trip includes, accommodation, food, bus, and train, and a very intensive and life-transforming coursed along with a very comprising written material. If you want to include the trip to Barcelona in your plans, which includes train, bus, and entrance tickets, you must add another 1000 kr. The trip does not include food and flight tickets, but I will gladly help you book the ticket, if you want me to.

Let me know, if you want to go on the following trip, and we’ll do it!

This grail course was, like the Glastonbury grail course, handed down to me by Mary Magdalene , and affects your heart chakra in a deeply transforming way, all depending on, ofcourse, how easily you can surrender to Love.

I do have some professional knowledge to share, since I am a member of a Druid order, the OBOD, read about my order here. You see, the Druids were the first spiritual group ever, outside of the Holy Land, that is, to accept Christianity, and the knowledge, which was handed over directly by Jesus and Mary Magdalene.

The grail courses are deeply transformative for your life, since they work with the heart-energy, and being centered in your heart energy enables you to be present in your very soul. Mary Magdalene told me, that these courses are the most powerful of all my courses, and indeed, it is so much different from the others, and I’ve often seen students on the grail course in Glastonbury undergoing a strong personal development on many levels. Quite often, even miracles happen.

In deep contact with the Higher Powers I will open those courses by telling the ancient story about the Holy Grail on a much deeper heart-level than most people know, and then I will tell the grail pilgrims about the Druid’s role in this context.

I will proceed to tell about the teachings of the Druids and their steps of initiations and then, aided by the powerful sound of my harp, I will lead the students into some deeply healing guided meditations based on the five grail symbols, which are arranged in front of the students on a very special altar, these meditations will enhance the student’s heart energy and sensitivity to their fellow beings, and connect them with various energy entities thus bringing them into the deepest grail mysteries and connecting them with the strongly healing spiritual awakening which follows when a being can surrender itself totally and absolutely to the Power of Light within and without.

We will work with a powerful symbolic world, where, ofcourse, the Holy Grail has a central place, however also empowered by the other grail symbols of no less potency, the sword Excalibur, the Stone, the Spear of Destiny, and, ofcourse the fifth element, Ether, or Caer Wydyr, which represents ETERNAL Love, when you are centered in your innermost being, your heart, it is this substance, that binds all the elements together to a whole. According to my visions there is also a grail knight for each corner of the world, and, according to my grail courses, Sir Percival represents west, feelings, and the Holy Grail. Small wonder, that Montserrat, where Sir Percival found the holy grail, is considered to be the planetary heart chakra.

Subsequently the students will have the opportunity to describe their visions and experiences, and, as a translator for the Higher Powers, I will send light, amplify and clarify the individual’s experience.

These very strong impressions will be manifest on many levels in us during the course, during the performance of practical ceremonial work, along with being able to work more intensively with ourselves and others in connection with the grail-symbols.

More – very extensive – material will be handed out to the grail pilgrims during the pilgrimage.

We travel on individual tickets, so, you can fly from wherever you like.

If you think that this is just you, please do not hesitate to contact be by mail, or by phone.