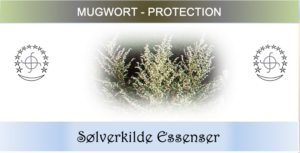 By the rising of the moon, at 3:45 p.m., Jørgen and I were well underway, heading for a burial mound, which is inhabited by a troll family. Mugwort had told us to walk all the way to the mound from the parking space at Halle Lake.
As agreed with Mugwort, we arrived at the mount at 4:30 p.m., since the sun was setting at 4:42 that day. For, in accordance with the old Nordic fairytale about trolls: “East of the Sun and West of the Moon” Mugwort wanted to be born between sun and moon, only widdershins, since the sun was now setting, and the moon was rising

That same morning there was a dense fog, which slowly lifted around 10 and gave way to one hour’s “almost-sun”. The rest of the day was rather misty with a slight drizzle, in short: It was Mugwort-weather. During our walk we were greeted by row upon row of Mugwort, most other flowers were gone. Majestically they stood like sentinels on either side of the road. When we walked back again, the full-moon light could be seen through the drizzle; an eerie light; In fact, I was happy that I was not walking alone, but for safety’s sake I had bought a broad-brimmed hat in the nearby secondhand shop, for in Denmark, some witches believe, that you must wear a hat so as not to fly away.

A few days before, Mugwort had given us a few indications: Fantasy, esoteric knowledge, freedom, assertion. Protection against black magic, predominance, and illusions, which create fear, so that people are being misled against their will. To see things as things are. Draw the line and do it in chalk. Put your foot down.

When we reached the mound there was a lot of Mugwort, but Jørgen knew precisely where we should be, and so we sat down next to a cluster of Mugwort, and I reverently placed the bowl of Silver Spring water in front of it.

More words followed: Trust, solidarity, and an image of a group of people who were embraced by a huge arm. Fearless, boundless, unlimited.

And then Mugwort spoke:

“No-one can stop me, for I am the voice of the people, rising to fight supremacy, restraint, exploitation, lies, and deceit. I am the defender of the people and give back the strength to those, who have forgotten their strength. I tap you on your shoulder and remind you of your right to be the one you are. I stand in my own center and surrender to my own death. Then I find myself, so that there’s nothing left to scare me. Consequently, I am the wort of the witches and the trolls, the wort of the resurrected, and the wort of the wisemen and -women. I am Odin’s wort, for I gave myself to myself, learned the wisdom of the runes. Many times, humans have cut off our heads, yet we are many, and through our roots, our heritage and our kinship we shall always rise again. We nourish the animals and protect against vermin and tommyrot. And when they have first tasted us, they remember their strength, and nothing can bind them anymore. I am proud of my seed, and respect other seeds. I speak my mind and let others speak theirs.

I love the sun, but also the darkness, and now when the sun goes down – said Mugwort the moment the sun went down – I will show you all that, which is contained in darkness. For darkness contains snippets of forgotten knowledge, which, when you have finally collected all the fragments, turn into light. So, when somebody pull the wool over your eyes, I shall wake you to light. This is how I speak with Odin’s ravens Hugin (remembrance) and Munin (memory), and together, the wind will carry us, so that we may whisper it in the ears of all living beings. Thus, I protect against witchcraft, for when you know the runes of witchcraft, you can always ward them off with love.

I am the child in “The Emperor’s new Clothes” who says, “but he hasn’t got anything on!” I support truth, and I don’t care whether it is found among rich, or poor. I don’t care about illusions, I whistle for that, and remind you of your lawful right. The wind blows in the whistles and in my crown, my roots are alive, for direct contact to the sky requires a good grounding.

And here, on All Saints I shall show you who the true masters and saints really are. So be it!”

Mugwort belongs to the moon and to the earth. Mugwort tells me that it means mage wort. Homeopathically it is used as a remedy against malaria, it is cleansing, known for expelling microbes, and viruses, is used as a vermifuge, prevents rot and keeps away insects, it is said to help against abdominal diseases and digestive problems, due to the contents of bitter substances, first and foremost tannins. Before the hops came to the British Isles, Mugwort was used to keep the beer fresh and give it the characteristically bitter taste, today it is used in the Danish specialty, called “Bjesk”. In ancient lore it is said to protect against tiredness, physical and psychic attacks, witchcraft, and poisoning. Later on, the wort became attached to John the Baptist, and was carried as a protection against evil spirits. Mugwort can be used as a poultice. It is said to calm the nerves, to be disinfecting, and is hemostatic. You can smoke it, and it was called sailor’s tobacco in the old days. Mugwort contains thujone, which is said to strengthen psychic abilities and prophetical dreams. It said to belong to the old wisewoman who show you the truth if it is hard to relate to. In China it is used to ease chemotherapy and in connection with acupuncture. Mugwort is edible in small quantities, if you pick the top of the plant. The taste and aroma are best when the buds are no longer green but have ripened and have had the time to dry a bit, so, right now, by the end of October.