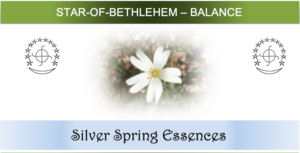 Great was my awe, when, after its birth, I learned that Greater Stitchwort was once called Star-of-Bethlehem, and was associated with Whitsunday, or Whitsun, which is what Pentecost is called among the Celtic Catholics. This Star-of-Bethlehem – not be confused with Ornithogalum, the other Star-of-Bethlehem, with its different way of helping people out of their distress – had also chosen the time of his/her birth, a couple of weeks ahead of time. I’m writing his/her, because this plant balances the masculine and the feminine. A true mage balances the masculine, and the feminine in his/her entire being.

Whitsun is the very day, when Star-Of-Bethlehem chose to be born. This is the day when we celebrate the Holy Spirit descending upon the disciples of Christ, imbued them with wisdom so that they could speak in many tongues, many languages, consequently enabling them to communicate with people from many other countries, Apostles Acts 2:1-31. Whit means wisdom in Anglo-Saxon, could also be the word for “white”, and part of the word “witch”.

The Holy Spirit is symbolized by a white dove, and Sosha saw two doves flying very close to her in her house on the 12th of May, reminding her again, that Star-Of-Bethlehem definitely wanted to be born.

The Holy Spirit is also, often likened to the Mary Magdalene, in Aramaic Mariam HaMigdal, whose name is also Sofia, and sofia is the Greek word for wisdom.

Upon the very day of his/her birth there was a feeling of purposeful logic, and after having returned from Silver Spring on mountain bike (!) with the sacred water, I was led to a cluster of Star-Of-Bethlehem on my premises, with a rounded spot in the middle just big enough for me to place the bowl.

And immediately Star-Of-Bethlehem began to speak, and it spoke so rapidly, that I had to allow myself some time afterwards just to recall the simultaneously rapid communion between the water and the plant:

When you Suffer, and yet Survive
I am the Star-of-Bethlehem, guiding you, easing sorrow, easing pain.
When you think you have been stabbed in the side, you are, in fact, transcending into a brighter light.
I am Jesus, Yehoshua, Savior, Redeemer, Fisher King, nailed upon a rood, the Roman spear fast in my side.
I am Sophia, Wisdom, Mary Magdalene, Catalyst Criticized for Crimes of Others. Listen and See.

United we are Healers without Boundaries.

I am The Forked Pole
Sun-Dancers are tied with strings to a Forked Pole, until they, through suffering, dance themselves free. The Indian Way teaches us, through the image of The Forked Pole that every person has One Side, and The Other Side. Both sides must we love. When my flowers are young, they have five petals only, like the five fingers on one of your hands, but after a while, each of those five petals becomes a forked pole, which eventually divides itself into two, like the five fingers on your other hand, left… and right… leftist… or rightist…, both sides we must love.

Go beyond “Right” and “Wrong”:
This is enlightenment. Meister Eckhart: “God is not good; he is beyond that”. We must transcend all beliefs, all ideologies, all so-called images to go beyond and see God, push past all limits to find our inner truth. Sir Parcival, one of the grail knights means: Pierce the Veil. I call you to go beyond and see the great gifts that all the stuff you seem to dislike will offer you. See that the Creator, even through your greatest suffering gave you the greatest gifts and teachings, so never despair, never give up.

I make you Whole
The Light Twin, and The Dark Twin. Only by embracing both sides of yourself with love and compassion, you become whole. Holos in Greek means whole; Thus you obtain The Inner Wedding and enter a blissful state.

I unite Mother Earth and Father Sky in Me
Through my long stem, lance-like leaves, and white flowers I unite. A kite passes by overhead with a piercing cry, reminding us of who we are and from whence we came.

Man, and Magic
Five is a pentagram and symbol of Man. Repeat something thrice, and it becomes magic. (1) Five white petals (2) becoming 10, (3) times 5 flowers becoming 50 white petals = number of days from Easter to Pentecost. Ten petals are Life through Rebirth – The Wheel of Fortune. Ten is the number of the ten commandments.

Balance
Obey the ten commandments. Wake up and restore the Balance of Mother Earth – if you do not, corona will.

I stand tall, and yet I am so brittle; That is the nature of wisdom. When a storm comes up, bend and do not break. I am man and wo-man, light and darkness, I am balance between the two. Be balanced and all is good.

According to ancient lore, this flower belongs to the pixies, and it is said, that if you pick the flowers, you will answer to it. Also, it was said to provoke lightening if picked.

If you do have the courage to pick it, this plant is edible, and is highly nutritious containing vitamins A, B12, C and D along with iron, potassium, calcium, silica and zinc. It has cooling, anti-inflammatory and healing properties and an ointment made from the crushed leaves is very soothing for eczema, bites, heat rash and even psoriasis. Greater Stitchwort eases pain and stitches in the side, which in the old days were called elf-shots. It was also believed to heal broken, or fractured bones.

In 2002 it was determined that Star-Of-Bethlehem seeds contain methanol, a substance known to have powerful anti-bacterial, anti-fungal and anti-biotic properties. This could treat a range of ailments which have proved resistant to normal anti-biotic medications. Currently it is being tested in the treatment of intensive care, organ transplant and serious burns patients and in cases of sepsis.